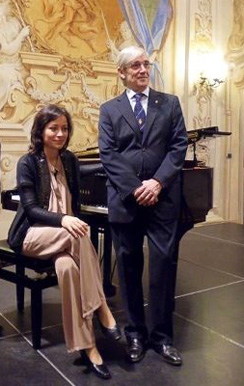 Since the founding group of French and Italian composers first met in Rome in 2011, many Italian composers have joined the Villa. We have organised a few gatherings, particularly in the North of Italy, especially Milan. It seemed only natural for the Italians to have their own centre with material and information in their language about what's happening at the Villa and its projects and various events. This became possible in 2014 thanks to the combined efforts of Daniela Manusardi and Gianni Possio.

As of 3 November 2014, the director with responsibility for the Villa's Italian branch is Giacomo Platini.

The Italian branch is constantly linked to the management via all the latest communication technologies and this facilitates understanding between members.

When the Villa took up residence in Turin (*), the need for a more organised approach and clearer understanding of how it operates became all the more apparent. The magnificent setting of Villa Tesoriera is simply ideal for our Italian branch to organise various events.

(*) NB: We credit pianist and composer Daniela Manusardi, in charge of the Villa's Italian branch, with the idea of merging the Villa Tesoriera with the Villa of Composers. It was after performing several recitals in this magnificent setting that Daniela Manusardi got the idea that our project might pair well with the Tesoriera. The meetings that followed in autumn 2013 between Dr Messina (head of the Turin City library authority), Dr Monge (Director of the Tesoriera) and composers Lorenzo Ferrero and C. Guyard, were decisive in shaping the final proposal for the City of Turin. In April 2014, the City of Turin approved an agreement that established Villa Tesoriera as the artistic headquarters of the Villa of Composers.