Doors open at Villa Tesoriera at 4.30pm
Concert at 5pm

The theme for this fourth concert organised by the Villa of Composers at Villa Tesoriera, as reflected in the choice of programme, is closely linked to the second key principle in our motto, "Create and Transmit". This principle is a direct result of the enthusiasm of successive generations of artists for musical works, as nurtured by encounters between friends and the legacy of musical parents. 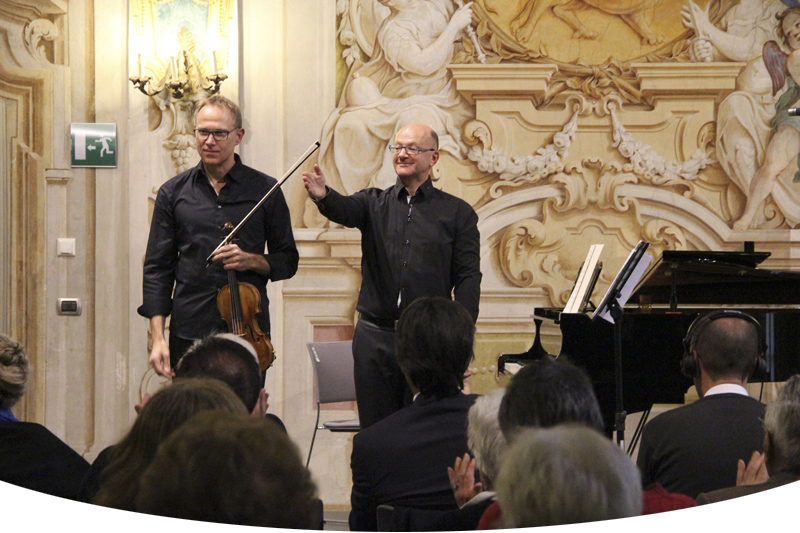 In 1985, Franck Della Valle and Marc Lys, students at the Paris Conservatoire, performed the work "Voyager III" by fellow student Christophe Guyard. Around the same time, Marc Lys was enjoying playing a series of piano pieces by Franck's father, Jean Della Valle, and was keen to make them more widely known. Some time later, Marc met pianist and respected teacher Thérèse Dussaut, daughter of the composer Robert Dussaut, who had won the prestigious Premier Grand Prix de Rome in 1924. From 1925 to 1928, Robert Dussaut lived and worked at the Villa Medici in Rome. Maurice Ravel died a few years later, in 1937, in France.

These encounters between generations are vital for the transmission of musical repertoire. All too often, after the early glory days of the first public performances, works can undeservedly fall into obscurity over the years. This is why the Villa of Composers gives the children of deceased composers the opportunity to submit and promote catalogues of works by their parents.

Franck Della Valle (leader of the Paris Chamber Orchestra) and Marc Lys (co-founder of the Villa of Composers and a lecturer at the Paris National Conservatoire for Music and Dance) invite us to reflect on this question of the transmission of artistic works as they perform a programme of French music including pieces by Maurice Ravel, Claude Debussy, Christophe Guyard, Jean Della Valle and Robert Dussaut.

This concert was made possible thanks to First Finance [Link] and the valuable cooperation of the Andrea Della Corte music library.